There are two main drivers why larger companies intend to establish Enterprise Resource Planning (ERP): They see opportunities to consolidated their IT landscape by integrating various systems housing siloed information, eventually saving money, and, once an active ERP established, they can consolidate existing processes as well (Matthews, 2013), reducing efforts and optimizing business delivery. ERP enables data mining which enabled for further, for example, product or supplier optimizations (Streibich, 2013). This post will summarize and critically review the accountant role as described by Newman & Westrup (2005).

At first, the article gives an example how the financial expectation of an ERP differ before the implementation vs. during vs. after the implementation, where in the end it is giving a clear-headed review on the impact on accounting and savings.

The article shows how all parties need to be involved from the beginning and expectations need to be set on all departments, for example, manufacturing, finance, accounting, human resource, supply chain, sales and customer service to make an ERP system work.

Then it is highlighted, that accounting does usually lose parts of their legacy control as ERP is mostly handled by information technology staff and therefore take over the driver seat, described as “technology power loop”.

It is further argued, that an implementation of ERP is “scary” as all department’s data needs to be pulled together, and only ideally, they all match for, in example, a bill of material. During ERP implementation it is found that communications through the impacted silos is complicated and needs a lot of interpersonal skill; business (performances) may be reduced. 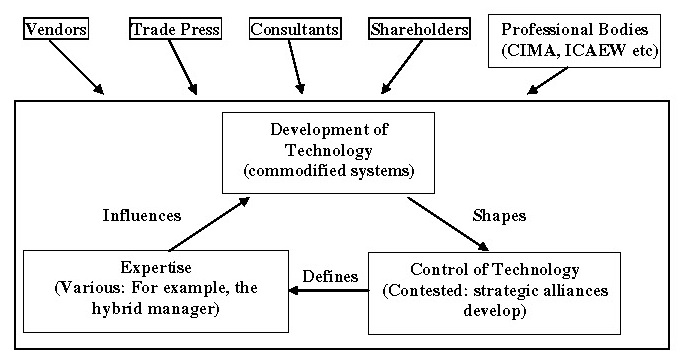 Although the research is clearly focused on account’s IS, the survey of only participants in an accounting environment (CIMA) as a starting point is fair, but for a comprehensible view on the topic, ERP and accounting should be viewed from at least two more departments, IT and (top) business Management to provide a comprehensible picture. The issue that IS requires input from all people who need to work with it in the future, also to overcome entry barriers (including education, training and support) on all sides like (Staehr, Shanks, & Seddon, 2012) said, an overall soft systems design as suggested by Checkland (1988) (Checkland, 1988) should be considered, especially as all departments possibly cost or spend money and are relevant for accounting as well as for IS.

The situation was captured well and unique, however it does reflect only accounting control as phenomena without the hermeneutics of a global information systems and challenges for all departments when moving from specialized (legacy) systems to a single system that has only one epistemological position through the software design this new system was designed for.

All other shareholders need to be included in ERP design to be successful (Staehr, Shanks, & Seddon, 2012), hence shareholders should be highlighted and represented within one of the three main boxes of figure 1, especially “development of technology” in order to ensure ERP is not established for IT’s/IS’s sake, according to accounting but all given information systems to be integrated and modified (on a daily basis) are captured and a working system can be created.

The paper was well structured and could be followed easily, the suggested framework is a good start, but lack a definition of the team definitions, especially how IT or accounting would split their influence or roles on IS design for ERP setup and maintenance.

Major ERP/IS topics were not mentioned  like could-based elastics (allowing IT and costs to scale to needs), data security by design (especially for financial figures) and if ERP is a must or if already an IS on the deathbed like (Savitz, 2012) suggests. This shows accounting alone should not run IS (and maybe, in turn, IT must not run a business nor accounting).

Streibich, K.-H. (2013). the digital enterprise the moves and motives of the digital leaders. Darmstadt: Software AG.